EGF 0.5.0_M6 is available for Helios and Indigo.
This version enriches the EMF Generation with the generation of the Java Doc. 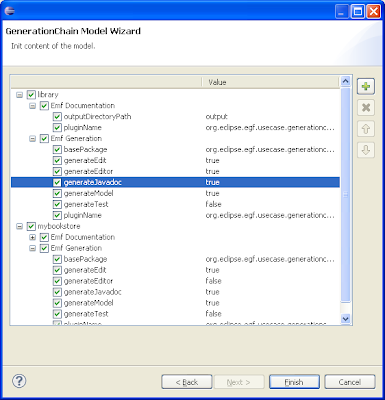 Precondition: Eclipse must be launched with the JDK (and not with the JRE).

If you are curious and interested, the JavaDoc generation is realized by an activity workflow: 1) an Ant script is dynamically generated with an EGF pattern, 2) this script is provided to an EGF Ant task which executes it on the fly. 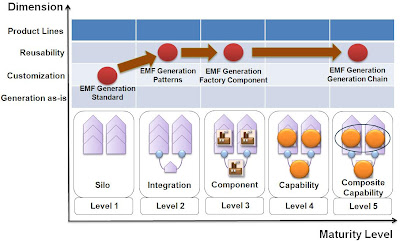 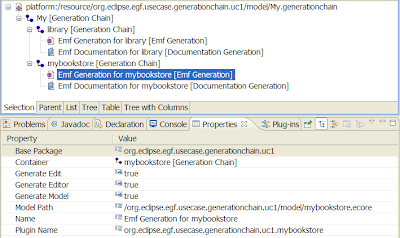 In the EMF Generation context, the user simply declares the EMF Generations to be applied: s/he selects a set of ecore models, sets the main generation features (e.g., plugin, base package names) and executes the generation chain. Before the execution, those features are translated into generation elements at the implementation level. Genmodels are automatically created with the management of the genmodel dependencies, and the management of the [workspace / platform / runtime] priority. Next, the genmodels can be modified at any time.

At the meta-level, the structure of a generation chain is extensible. This means that the EMF Generation can be enriched with other generation aspects, such as the Java doc.

A generation chain is translated on the fly into factory components, for instance to take into account that the model / edit / editor parts are generated or not. However, internally, those factory components can be customized to have a customized EMF Generation. During the translation, this customization is preserved.

This post and the previous one have shown how to enhance the EMF Generation:

Download EGF by update site with Amalgam or here.
Examples are also available.

A video is available is here

Enhancement of EMF Generation - Part One

EGF (Eclipse Generation Factories) is an EMFT component in incubation dedicated to the generation, and more largely it defines a framework for software production. The first domain of interest for EGF is the EMF Generation. The reason is that the EMF Generation represents a good case to assess EGF, and the result can be very useful for the modeling community.

The EMF Generation has reached a very good level of maturity. In this context, the interest of EGF is to enhance it with topics such as team working, reusability, customization of off-the-shelf EMF generations, and facilities to create EMF generation chains.

1. Beyond a work in silos...
The EMF Generation is written in Jet to apply a model-to-text transformation from a genmodel file. In order to customize the generated code, it is possible to override or insert code. The inherent problem with a model-to-text language such as Jet is that reusability is limited: inheritance is not supported, model-to-text scripts cannot be reconsidered later in a new project context, and composition of contributions from different team members is impossible. In other words, the EMF Generation works in silo. However, the fact is that the EMF generation is the result of a long experience and, with all the details and subtleties it contains, it would be uneasy to rewrite and modernize it. Then, what kind of improvement is possible?

2. Executable patterns
EGF provides a first formalism, named pattern. A pattern has roles, a precondition, and a set of methods written in a language such as Jet. Pattern inheritance enables to support polymorphism, and then to have a polymorph Jet; pattern composition enables reusability of patterns in different contexts; pattern merge enables to assemble and integrate patterns; pattern substitution enables to change patterns by other ones and then to reconsider later different parts of a generation. To follow the EMF Generation evolution (Helios, Indigo...), an EGF reverse tool automates the Jet-to-pattern transformation.

3. The team working
Pattern merge enables to integrate customizations of EMF generation written by different team members and then to support collaborative work. 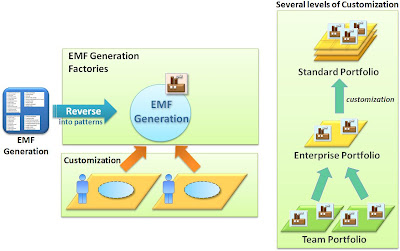 Those maturity levels are combined with dimensions. The two first dimensions consider the EMF Generation without and with customizations. The third dimension addresses reusability, and the last one the product line.


7. Conclusion
In order to enhance the EMF Generation, EGF has realized a paradigm shift successively with patterns, factory components and generation chains. Some points of conclusion for this first part:

A/ The EMF Generation is a domain-specific generation for EGF where the domain is EMF
B/ With a pattern-based generation, EGF is able to reproduce the same generation than the EMF generation
C/ Add-value:


A next post will explain how to easily set up EMF Generations.
Publié par Benoit Langlois à 01:46 1 commentaire:

The EGF tutorials, videos, and examples are regularly updated and enriched in the EGF Wiki. A list of technical documents is now initialized. Their interest is to better understand the main concepts of EGF and the EGF foundations. 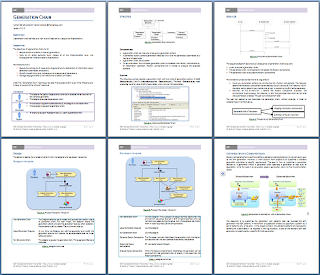 EGF was very active during the last past months:
- Aggregation in Indigo/M3
- Two generation portfolios already available: customization of the EMF generation, a build chain editor and generator
- A simple activity workflow, but able to support Java and JRuby
- etc.

More news and materials in the coming weeks...